KAWANISHI-CITY, Japan, March 9, 2021 /PRNewswire/ -- Quantum dots are extremely small fluorescent nanoparticles typically between several hundred to several thousand of atoms or molecules, and 1 to 9 nanometers in diameter. They are also referred to as artificial atom molecules. Quantum dots have the concept of energy level, bandgap, conduction band, valence band which are the same as for normal bulk size material.  However, because of its quantum confinement effect caused by their extremely small size, energy level of quantum dots become discontinuous and separated. This means that one can control the color of light given off by a quantum dot solely by changing its size and chemical composition, and light can be converted into nearly any desired color in the spectrum ranging from the UV to the IR region.

Among visible light colors, red, green, blue, these 3 colors are called 3 primary colors of light. To obtain while light artificially, it is necessary to possess wide emission spectra which contains all 3 primary colors, or to combine multiple LED which emits their individual light corresponding to red, green, blue. However, it is expensive to apply 3 colors of LED. So that in general, the combination structure of blue LED (such as GaN: Gallium Nitride) and its complementally color of yellow phosphor is often used. As phosphor, (Y,Gd)3(Al,Ga)5O12 : Ce3+ (YAG) and (Ba,Sr,Ca)2SiO4 : Eu2+ is often used. Recently, other types of nitride, oxynitride and sulfide are also applied.

Currently often used YAG based phosphor materials have light scattering problem due to their micron level size. However, quantum dot is super small so that light scattering is not a problem because they have high transparency at the visible light wavelength. Therefore, both incident light from blue LED (GaN) and emission light can be utilized efficiently. Eventually, it is possible to enhance the light strength with same electrical energy. In brief, the cost of electricity consumption could be cheaper compared to currently used white LED light. Moreover, light emission part (quantum dot part) and blue light source (GaN) is structurally separated so that the temperature increase of GaN can be suppressed which eventually expanding the life span of LED.  In addition, currently often used YAG is quite expensive. Quantum dot is also said to be expensive although the raw material of graphene quantum dot can be relatively cheap. Thus, this type of new white LED can be cheaper than currently used white LED.

Green Science Alliance will start supplying this newly innovative graphene quantum dot based composite materials in Japan and to all over the world, to expand their quantum dot business. 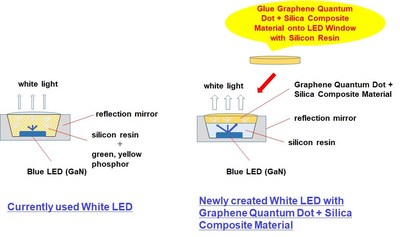